in Past Annual Meetings, 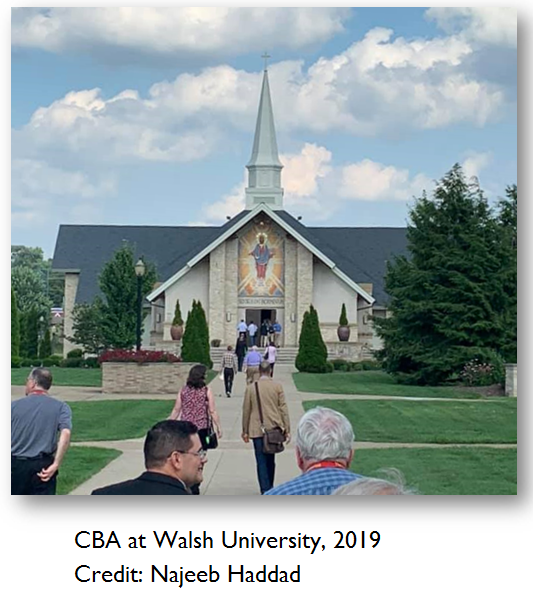 The eighty-second international meeting of the Catholic Biblical Association of America was held July 27-30 at Walsh University in North Canton, Ohio. The meeting began on Saturday, July 27, with a welcome from Christopher Seeman on behalf of Walsh University. The opening general session was a panel discussion entitled “Biblical Perspectives on Responding to the Clerical Sexual Abuse Scandal” featuring Gary A. Anderson, Francis, J. Moloney, S.D., Anathea Portier-Young, and Gina Hens-Piazza. The address was followed by a social.

The morning concluded with papers presented in simultaneous sessions: Mark S. Smith, “Judges and Historiography” and Florence Gillman, “Paul and the Thessalonians Who Abandoned Their Idols.”

The Association gathered in Our Lady of Perpetual Help Chapel for the Sunday celebration of Eucharist with Dale Launderville, O.S.B. presiding. Members of the association who died since the last meeting were commemorated during the liturgy: Alexander A. Di Lella, O.F.M., Michael Ignatius Glazier, Gerald Neil Knoppers, Marilyn Schaub, Lorenzo A. Tosco, C.S.J. Most Reverend John Michael Botean, Bishop of the Romanian Rite diocese of Bishop of Saint George’s in Canton, was an invited guest for the Eucharist and evening’s program.

The evening concluded with the CBA President’s Address, “Ezekiel’s Priestly Imaginary: A Symbolic or Idolatrous Reality?” delivered by Dale Launderville, O.S.B. The address was followed by a social.

Felix Just, S.J. was the presider and homilist for the 7:00 A.M. celebration of Eucharist.

The task forces and continuing seminars resumed their work in the morning, followed by simultaneous sessions: “The ‘Beauty of Created Things’ in the Wisdom of Solomon” delivered by Karina Martin Hogan and “Family and Empire in the Shepherd of Hermas” presented by Susan Elliott.

Two sessions of research reports during the afternoon heard the following papers delivered: Andrew T. Glicksman, “ Wisdom and Spirit in the Wisdom of Solomon”; Luke Emiehiele Ijezie, “The Identity of the Medium of Endor in 1 Samuel 28”; Mark Reasoner, “Paul and the Merit of the Fathers”; Todd Hanneken with Vanessa Cypert, “Pneumatology in Early Christian Scribal Practices”; Kelley Coblentz Bautch, “Royal Women, Women Regents, and 1 Maccabees”; Francis M. Macatangay, “Traditions on Abraham in Tobit”; Daniel L. Smith, “Eschatic Manna in John, Paul, and Revelation”; Charles A. Bobertz, “Boat Travel in the Narrative Construction of the Gospel of Mark”; Michael Ufok Udoekpo, “Becoming A Church-Family that Witnesses the Gospel to All: An Intertextual Study of Luke 3:4-6 and Isaiah 40:4-5.”

The CBA President and Chair of the Business Meeting, Dale Launderville, O.S.B., called the meeting to order at 3:30 pm having established a quorum (97 full members present with 79 required for the quorum). He called for a moment of silence for members who had passed away since the last meeting. Starting with the In Memoriam, a PowerPoint slides accompanied each point of the meeting.

In conclusion, Atkinson offered thanks to the membership, so many who are generous with time and contributions; to Walsh University, in particular Chis Seeman and his mother who came just at the right time to help with registration; to Lisa Tarker who is a tremendous asset working in a whirlwind of change; to the Executive Committee – Dale Launderville, O.S.B. and Harold W. Attridge, Jr., a small committee that is very important for providing quick feedback in its advisory capacity; and to the Executive Board, the members of which have done tremendous work and research, listening to one another and providing effective, wise leadership for the Association.

The report ended with a quote from Isaiah, “The grass withers, the flower fades, But the word of our God stands forever.” Dale Launderville then thanked Atkinson for his work, recognizing that he does the legwork of the Association. John Meier moved and Timothy Carmody seconded that the Executive Director’s Report be accepted. The motion carried in a unanimous voice vote.

The floor was open for questions. There being none, the candidates were accepted by unanimous voice vote. After the vote, Atkinson recognized the two Emerging Scholars Fellows for this year, Christian Gers-Uphaus and Ki-Eun Jang.

After the announcement of housekeeping items, John P. Meier moved, and Gregory Tatum, O.P. seconded that the meeting be adjourned. In a unanimous voice vote, the meeting was adjourned at 5:03 p.m.

Before dinner, a prayer service “In Honor of St. Martha” was led by Patricia Walters including a reflection by Sandra M. Schneiders, I.H.M. that was presented by Mary Ann Stachow, S.B.S.[DJA1]

The general session in the evening was a panel discussion entitled “Biblical Scholarship in Latin America: Celebrating Eighty Years of Revista Bíblica” with Ahida Calderón Pilarski and Jean-Pierre Ruiz as panelists. The evening concluded with a social.

Michael Patella, O.S.B. was the principal celebrant and homilist for the 7:00 a.m. Eucharistic liturgy.

The task forces and continuing seminars met in the first part of the morning. The meeting concluded with a general session address by Brigid Curtin Frein, “Jesus as Provocateur in Luke's Gospel.”

The following CBA members and invited guests were in attendance at the meeting: