The purpose of this series is to facilitate the publication of books of a specialized scholarly nature in the biblical field. It is envisaged that such a series would encourage work on technical, detailed subjects,
even of a restricted scope.
The series is published by The Catholic Biblical Association of America and distributed by HFS Books. 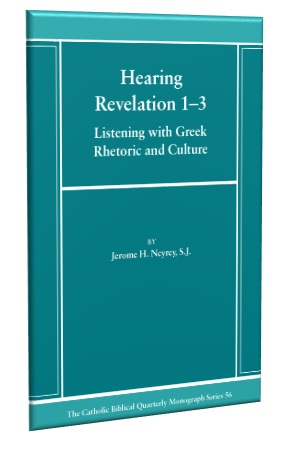 Volume 56:
Hearing Revelation 1-3: Listening with Greek Rhetoric and Culture
by Jerome H. Neyrey, S.J.
Recipients of Revelation listened to it, and heard it like other oral performances. Greek recipients knew not only Greek, but conventional ways of rhetorical presentation typical of Greek culture. They knew how works began (with a proemium, but with focus on speaker's ethos). Ethos of speaker was the first proof of persuading, and so audiences knew what one sounded like. They heard Revelation 1 as a continuous presentation, not like scholars pausing to examine each tile in the mosaic. The Speaker of Revelation 1-3 is Jesus – not John, who delivers God's revelation to the seven churches. After presenting himself in an impressive bodily manner, called an ecphrasis, he addresses seven individual letters. He repeats appropriate aspects of his ethos in his address of each letter. The letter type is solely that of praise and blame. Because this type is opaque to modern readers, the monograph presents examples of letters of praise and of blame. Greek hearers, moreover, valued more than anything praise, honor and respect, and so these cultural values are presented in some detail. Finally, each of the seven letters is then examined in the light of praise and blame, which in this context means in terms of common understanding of the cardinal virtues: prudence, justice, courage, and temperance. The two dominant virtues turn out to be justice and courage. Since most commentators on Revelation consider the cities from the eyes of elite writers of antiquity, the mean character of urban life needs be brought into focus. Only then can the virtues of the non-elites be identified and given proper praise or blame. Whatever else goes on in Revelation, the first three chapters are thoroughly Greek in composition, structure, and values. 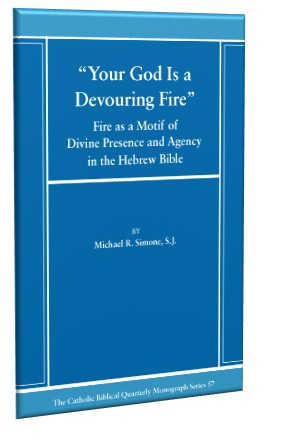 Volume 57:
Your God Is a Devouring Fire: Fire as a Motif of Divine Presence and Agency
in the Hebrew Bible
by Michael Simone, S.J.In the ancient Near East, the distinction between the divine realm and the material world was not always clear. In Mesopotamia, statues, kings, and even cultic utensils could become "gods" in their own right. Certain biblical traditions show this idea as well. Yhwh appears as a human during visitations to Abraham and Jacob (Gen 18:1-2 and 32:25-31). Yhwh also can act through objects (Gen 15:17; 1 Sam 5:1-5). This suggests that, in Israel as in Mesopotamia, a distinction between humans and gods was one of status more than ontology. Throughout the ancient Near East, religious literature included motifs that emphasized divine status, such as power, size, wonder-working ability, and the possession of numinous qualities.

In Israel, these divine "status symbols" were frequently storm motifs like cloud, precipitation, and fire. Fire was one of the most common, perhaps because, being vivid and powerful, it shared Yhwh's life-giving, transformative, yet dangerous qualities. In certain narratives, fiery motifs accompany an embodied divine presence. At other times, fiery phenomena are the sole perceptible indications of divine presence. As a motif of divinity, fire can symbolize divine agency even functioning at a distance from Yhwh or shared with a secondary agent like an angel, tool, or weapon. Israel's extensive use of fire in the cult gives witness to similar traditions. Divine fire accompanies each new cultic inauguration in the Hebrew Bible. A tradition in Leviticus suggests that this fire remained continuously burning and served as a "gate" that allowed God to received portions of the cultic offering.

In the Hebrew Bible, fire was thus a "status symbol" of divinity, drawn from traditional storm motifs and ancient conventions of divine embodiment. In its vivid ethereal appearance and power to give, transform, and take life, it symbolized the presence and agency of Yhwh, the God of Israel.