Symposium to Celebrate the Legacy of Fr. Gerard Sloyan 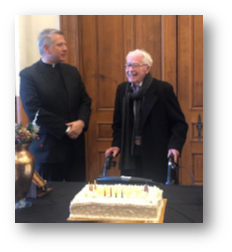 The CUA School of Theology and Religious Studies, in coordination with the Diocese of Trenton. will host a symposium celebrating the legacy of CBA member, Fr. Gerard Sloyan on Wednesday, March 4, 2020 from 10:00 am - 3:00 pm in the Caldwell Hall Auditorium of The Catholic University of America.

Fr. Gerard S. Sloyan is a priest of the Diocese of Trenton, NJ. He studied at Immaculate Conception Seminary, Darlington, NJ, and The Catholic University of America (S.T.L.; Ph.D.). He returned to CUA in 1950 to teach in the Department of Religious Education, serving as Department Chair between 1957 and 1967, developing courses in religion and theology for religious and lay students. He was subsequently Professor in the School of Religious Studies at Temple University, Philadelphia (1967–1990). Following his retirement from Temple, he returned to CUA as Distinguished Professor in 1994, and became Distinguished Professor at Georgetown University in 1996. Fr. Sloyan’s numerous publications reflect his wide interests and influence. They include Liturgy in Focus (1964), The Passion of the Jews (with L. Swidler, 1984); John: A Biblical Commentary (1988), Catholic Morality Revisited (1990), and Preaching from the Lectionary (2004). Fr. Sloyan celebrated his 100th Birthday in December 2019.

If you do not have a Catholic University login,
contact Roxana Paalvast at paalvast@cua.edu
to RSVP.